Cale escapes from the ship with Akima, who is wounded by Preed. The Valkyrie departs without them, with Gune and Stith still unaware of Korso and Preed's true agenda. Fortunately, the colony consists of a number of old spaceships, cobbled together from derelicts. With the help of the other residents, Cale and Akima (Who was healed from the wound Preed inflicted) repair and refit one of the ships, the Phoenix and races off to find the Titan before Korso. Amid the Andali Nebula's giant ice crystals, Cale and Akima find and explore the Titan with a holographic message left by Cale's dead father who reveals the true nature of Project Titan: The ship can create a completely new Earth-like planet with DNA samples of the Earth's plants and animals, requiring a huge input of pure energy (the Titan's reserves were depleted escaping Earth); the development of this technology is the reason the Drej feared humanity's potential enough to destroy Earth. Korso and Preed then confront Cale and Akima and interrupt his father's message, but before Korso could do anything, Preed detonates a small bomb inside the Valkrie to kill both Stith and Gune and betrays Korso before holding him, Cale, and Akima at gunpoint. Preed then reveals a more tempting deal; he gets to live and get paid for helping the Drej find the Titan, but only after he kills them all before the Drej can show up. Preed then beats up Akima and Cale in an attempt to finish them off, but Korso stops him and snaps his neck as retribution for his treachery. He then engages into a fight with Cale over the possession of Cale's ring, but falls into the depths of the Titan by accident after Cale attempts to save him from doing so. Trailer
Posted by Unknown at 02:10 No comments: 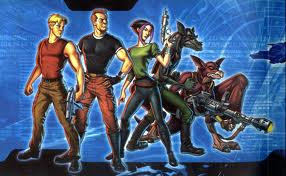 It is genetically-encoded to Sam and responds to Cale himself, making him the only chance for humanity's future. The Drej find the salvage yard and drive Cale and Korso to Korso's ship, the Valkyrie. Cale is introduced to the other members of Korso's alien crew; sly first mate Preed (Nathan Lane), astrogator Gune (John Leguizamo), cranky weapons expert, Stith (Janeane Garofalo) and another human, co-pilot Akima (Drew Barrymore), to whom Cale is attracted. They travel to the planet Sesharrim, where the Gaoul, a race of bat-like creatures, tells Cale how to interpret the map and find the Titan, hidden in the Andali Nebula. The Drej again attacks the group and capture Cale and Akima. The Drej eventually discard Akima, sending her off into space in a pod (where the crew finds her) and scans the map from Cale, but Cale escapes on a Drej ship and also reunites with the Valkyrie.
The ship is able to reach the human drifter colony called New Bangkok for repairs and preparation for the trip to the Titan. However, Cale and Akima find out Korso and Preed are secretly working for the Drej, having used Cale so that they can destroy the Titan in exchange for money. As a result, Cale confronts Korso for his betrayal, to which Korso compromises that the Drej captured and killed Sam who refused to disclose the Titan's location. Korso also reveals that he has lost his faith in both humanity and beating the Drej ever since then, and that he felt that the only way for humanity to survive was to side up with the Drej. watch more 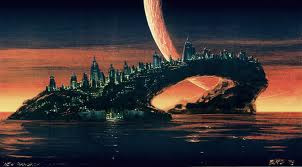 In 3028, the Drej, a malevolent, energy-based species, declares war on humanity before Professor Sam Tucker (Ron Perlman), a lead researcher of the experimental Project Titan, gives his 5-year-old son, Cale (Alex D. Linz), a ring and sends him on one of the evacuation ships with his alien friend, Tek (Tone Loc). Meanwhile, Sam and his team launches the Titan spacecraft into hyperspace and the Drej mothership obliterates Earth, which explodes into a massive cloud of debris that destroys the Moon as well, ending any chances of humanity finding a place to settle in the universe. Most of the evacuation ships escape, though some are destroyed by the Drej and Earth's debris.
Fifteen years later, the surviving humans are reduced to either living in drifter colonies on settlements made from the metal of the evacuation ships or being second class citizens in alien societies, in which they are generally ridiculed. Cale (Matt Damon) breaks up old spaceships in the salvage yard of the Tau 14 asteroid belt and meets Joseph Korso (Bill Pullman), a human captain who requests Cale's help to find the Titan. Korso also reveals that he helped Sam and Tek finished Project Titan and was the same driver who helped Sam take Cale to his ship before the Earth was destroyed. He shows him how his ring contains a map to the ship.

Titan A.E. is a 2000 American animated post-apocalyptic science fiction film[3] directed by Don Bluth and Gary Goldman. The title refers to the spacecraft that is central to the plot, with A.E. meaning "After Earth."
The film's animation technique combines traditional hand-drawn animation (with digital ink and paint/animation using Toon Boom) and extensive use of computer generated imagery and features the voices of Matt Damon, Bill Pullman and Drew Barrymore. Its working title was Planet Ice. The film received a mixed response from critics and was a failure at the box office, barely grossing half of its production budget watch more
Posted by Unknown at 02:03 No comments: